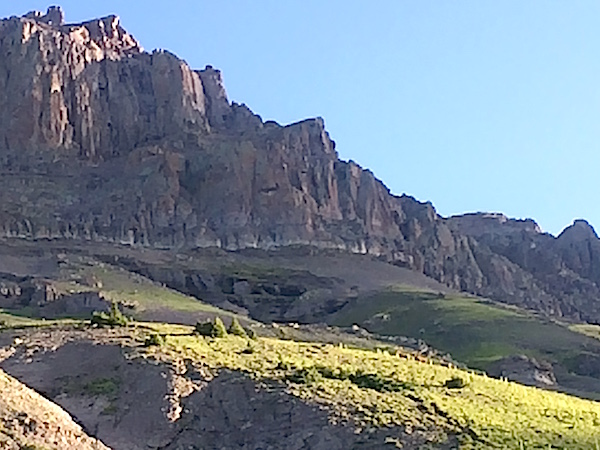 Dallas Peak is a exciting adventure comprising of some excellent single track trail, off trail hiking and a great deal of 3rd classing with a few 4th and 5th class exposed steps. Since the weather forecast was looking good Derrick and I opted for a relatively casual 5am start from the Mill Creek trail head. We quickly took our first L onto the Deep Creek trail, which led us up to the start of the Sneffels high line trail. Here we took a break to get some food and water as the sun started to rise.

We then continued up the classic and well-worn High Line trail, which in its own right is a wonderful worth while loop from the town of Telluride with magnificent views. After hiking on the high line for about 1 hr we stopped below a dry creek bed on the SSE aspect of Dallas to watch a heard of Elk grazing above us at about 12,000ft. We took our second break here to take in the end of the morning sunrise hitting the Wilson massif to the south. Coincidentally, this is also were we would leave the high line and head up towards Dallas Peak looming above.

A faint game/ climber’s trail led us up and slightly to the climbers right before disappearing into the green grass. We continued up towards some large boulders were the cairned trail becomes a bit more defined though it is a fairly steep yet straight forward. We worked our way to the highest large boulder where we took our third break and put on our helmets and harnesses, stashed trekking poles and prepared for the steeper character of the upper mountain.

We headed into the 3rd class terrain and trended up and L on a ramp feature that took us to the first 4th class section that provides access through the first cliff band up a featured slab with numerous pockets. After getting up the slab we took the path of least resistance traversing up and right below the main cliffs of the S face on a well cairned exposed and sometimes loose 3rd class to a large flat ledge perched on the East ridge.

This spot gives you views of Blue Lakes and Mount Sneffels to the north and is a great rest spot. We then headed up the ridge passing the first difficulties on the right and continued up to a short exposed 4th class section. We continued weaving up to a well-defined chimney which has low 5th class climbing yet feels secure in the chimney. A fixed anchor exists up and right consisting of a pinch with blue webbing (this anchor is avoided by the summit rappel on the descent). 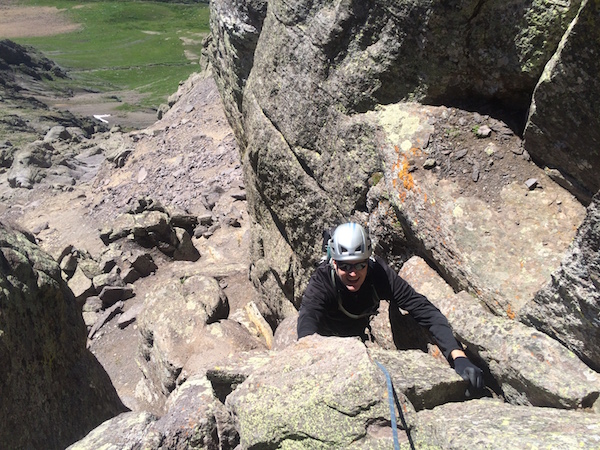 We continued up to the notch on the east ridge below the summit block and traversed out right onto the N face to a nice perch below the final 5th class section to the summit. If placing cams, a .75 and #1 Camelot protects the steeper section well. I opted for an intermediate belay just below the summit since there are few options for anchors on the summit proper. We then hopped up the last 4th class section to the true summit proper with great views of the surrounding San Juans.

After a nice rest on top and replacing the non-existent summit register we went the east side of the summit to the rappel anchor above the SE face. I decided to rap over the chock stone to get down what little snow remained and have a better pull for retrieving the rope. Its hard to beet rappelling directly off the summit of any peak and really adds to the enjoyment of this route. 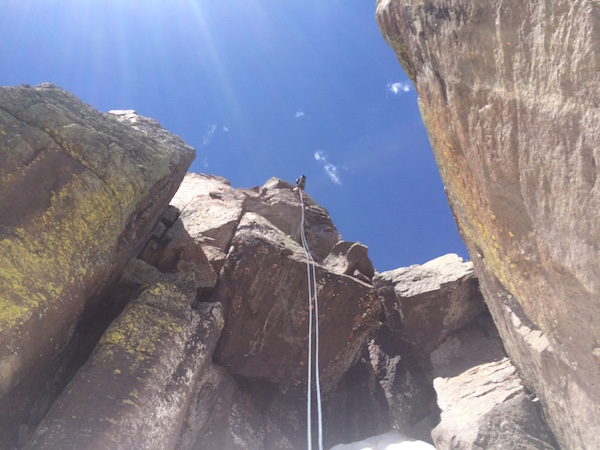 We continued down on 3rd class terrain to another fixed anchor, where it is optional to rappel the initial 4th class from the rest stop on the East Ridge. Then continuing down we retraced our steps back to the long traverse below the south face cliffs to the first 4th class section. Here we went down stepped terrain before hitting the initial section.

After getting back to the last large boulder where we stowed our trekking poles we continued down the broken trail to the welcomed sight of the well worn High Line trail. Just over an hour later we arrived back at the car. We had a great climb and I would certainly recommended this route as a great San Juan adventure with some technical aspects and incredible views of the surrounding area.