I’m just back from a great couple of weeks climbing volcanoes and traveling around the beautiful country of Ecuador with Greg, Vanessa, and Nick Blasic. We met in Quito and made the requisite tourist visits to the Mitad del Mundo (the Equator line), and beautiful historic Old Town Quito. It was my first visit to Ecuador and I was really impressed with the history and architecture of Ecuador, and particularly the old colonial areas of Quito.

We spent the first few days based out of Quito, staying in a nice hotel, and venturing off for acclimatization hikes up to 15,000 ft on local volcanoes. We had three main climbing objectives, the three highest peaks in Ecuador; Cayambe(5,790 m/18,996 ft), Cotopaxi(5,897 m/ 19,347ft), and finally Chimborazo(6,310 m / 20,702 ft). These are all snow/glacier covered volcanoes in the Central Andes of Ecuador. We warmed up and acclimated for a few days, then set off for Cayambe.

Cayambe (18,996 ft/5790 m)
The weather had been great for our whole trip, including the evening we arrived at the Cayambe Hut at (4,650 m, 15,257 ft) where we had dinner and prepared for our 1 am start for the summit attempt. As we woke up at midnight, it was pretty obvious that the weather had changed, the calm and starry night had given way to a windy, snowy early AM. We got dressed and had some food (and coffee) and hoped for the winds to calm. Every so often there would be a lull just long enough for us to get our hopes up, but without fail another gust came along and our hopes of clearing weather started to fade. At about 2am, we decided we’d better just get out and stick our nose in it, so we geared up and headed out. It didn’t take long to realize that the winds up out of the protected area where the hut sits were even stronger, but we climbed by headlamp up towards the toe of the glacier. Visibility was pretty poor as 30mph gusts of wind blew snow horizontally through the beams of our headlamps. At one point, we got to steeper section of rock that was covered with snow and ice, and decided we’d gone far enough. We were a bit disappointed by the timing of the weather change, but had a good adventure, and got to test out our goggles and headlamps that night.

We awoke the following morning to continued snowfall up on the mountain, with fairly heavy rains below us threatening to close the rough 4 wheel drive road that provides access to Cayambe. The other news we received this morning was that the next mountain we had hoped to climb had just erupted for the first time in over 70 years sending up plumes of ash and steam and closing the surrounding park. We left the hut that morning, and had a slippery and slightly adventurous descent back down to town, where we looked into the news to decide what this erupting volcano was going to do to our trip. One of the really special parts of climbing in Ecuador is that each climb is broken up by a chance to visit a different town, and stay in some wonderful historic Haciendas. We stayed this night in a 300 year old Hacienda called Pinsaqui, and enjoyed a glimpse into the history and culture of Ecuador.

The next morning, with a revised schedule, we were on our way to climb and extinct volcano, El Corazon (15,600 ft/ 4,788 m). We stopped along the way in the bustling local market town of Otovalo, and since it was Saturday, it was market day and we were able to enjoy the busy Andean market. We wandered around for a while, getting lost in the maze of stalls, and bargaining for the best price on some gifts to bring home. At lunch time, our local host/guide Marcelo, showed us to one of his favorite local restaurants where we learned to become fans of the traditional local fixed menu lunch called Almuerza which is typically a 4 course lunch for about $4 each. This became our favorite, and at every opportunity we would ask Marcelo to show us his favorite local lunch spots and we were able to enjoy some unique Ecuadorian cuisine. 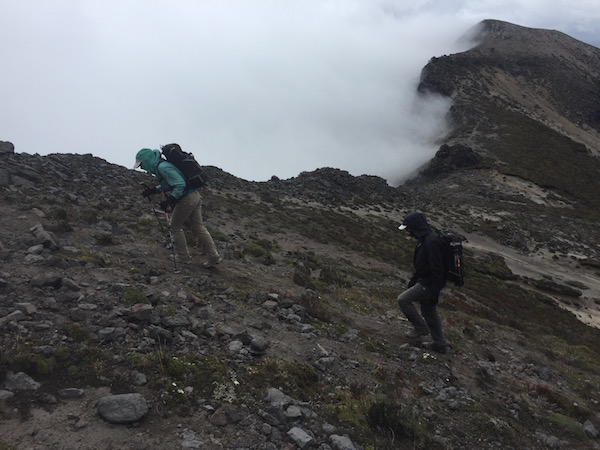 We had a great climb the next day, with a nice long approach making for a 10 hour R/T day with a bit of a rock scramble to the top of El Corazon. This wasn’t part of our original plan, but we were able to get a good day in the mountains, and importantly, continue to get to high altitude and acclimatize for the final climb of Chimborazo. 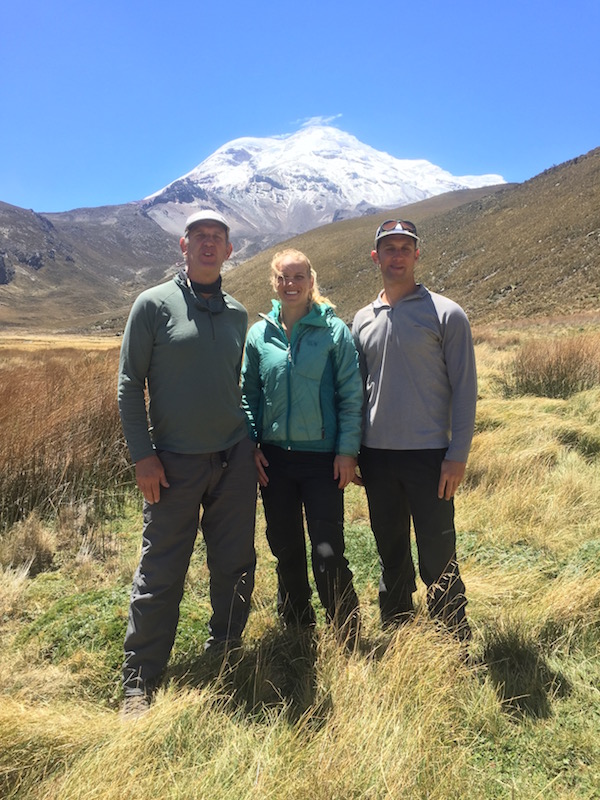 Chimborazo (6,310 m / 20,702 ft)
Our final climbing objective came in the last days of our 2 week trip to Ecuador. Chimborazo is an impressive mountain as seen from the surrounding country side, another old volcano sitting on it’s own and towering over the landscape. We stayed in a beautiful lodge at the base of the mountain at over 13,000 ft and enjoying views of the mountain from our dining room window. It was an amazing and very comfortable place to prepare to climb a 20,000+ peak. The day we arrived to Chimborazo, we went up to the trailhead for the El Castillo route and hiked up for an hour or so to nearly 17,000 ft to acclimatize and see the trail we would follow the next night by headlamp. The next day was all about resting and preparing for our night climb. We planned to leave for the trailhead by about 10pm that night, so there would be no real nights sleep and we all attempted to get a good nap, or at least some down time. It was a beautiful, but windy day and we watched other climbers return that morning thwarted by high winds on the mountain. We had some hope that the winds were going to settle down, and they did seem to as the day wore on. By the time we were leaving our lodge to drive to the trailhead at 10pm, the winds were relatively light, and the stars were on full display. It was a beautiful night for a climb! Once again we were climbing by headlamp, but this time it was a perfect night. We climbed through the 17,000 ft mark where we had climbed to the day before, and then on to the El Castillo section of the route. El Castillo or The Castle is a prominent wall of rock on the ridgeline that climbers are forced to traverse underneath, and has a well deserved reputation as a place to watch out for rockfall. We chose a very high route along the ridge in an attempt to traverse underneath El Castillo as high as we could and avoid exposure to the rock above as much as we could. At about 17,200ft we put our crampons on to begin the traverse which is a combination of rock and ice. At about 17,500 ft after traversing for about 45 minutes, we got to an area where there seemed to be active rockfall happening. We heard rockfall on our approach, and then as we stood there talking about the hazard, we heard more rock tumbling down across the trail in the darkness in front of us. The team decided that crossing under that rockfall zone, and then back down through the same area later, just wasn’t worth the risk. It was a tough decision for all, but ultimately it was just a good mountaineering decision. It wasn’t an area where we had any way to effectively mitigate the hazard, and it seemed that the rockfall was, for some reason, relatively active at that time although it was long before dawn. We started down, and quickly put any doubt behind us as we saw the headlamps of another small climbing team descending from just beyond where we had turned around, facing similar conditions that morning. We were all down safely and back to the lodge just as the sun was coming up on the day.

Our final stop in Ecuador was at another beautiful historic hotel in Banos, known as the adventure capital of Ecuador. We enjoyed the lush forests and warm air and hiked down to an amazing Waterfall the next morning before starting our journey back to Quito and on to home.

It was a great trip overall, we didn’t stand on top of any of the three volcanoes we had planned to climb, but that wasn’t really all that important in the end. I was truly impressed with the natural beauty, culture and history of Ecuador. We got to spend a bunch of days climbing and hiking in the beautiful Ecuadorian Andes, visited some really amazing places, and we all came home in one piece! We also were able to witness a historic eruption of Cotopaxi from a safe distance, and hope for the people of Ecuador that it settles down without a truly destructive eruption.