West Buttress June 9 Team is on the Glacier!

On Sunday, June 9th, a team of climbers met a guide team from Mountain Trip to finish their packing and preparations for an attempt on the iconic West Buttress route of Denali.  The team has been preparing for this challenge for months, and they are now taking the first steps up the Kahiltna Glacier that they will follow for the next 10 miles as they commence the climbing portion of their individual journeys.

The team spent Sunday in an orientation led by our guides and then each climber underwent a thorough equipment check, so that they do not fly to the glacier with too much equipment, yet have what they might need for the variety of weather that they might encounter.  Our guides drove them around Anchorage to pick up any last minute items and they went to the delicious Bear Tooth restaurant for lunch, before retiring to the Millennium Alaska Hotel for the evening. 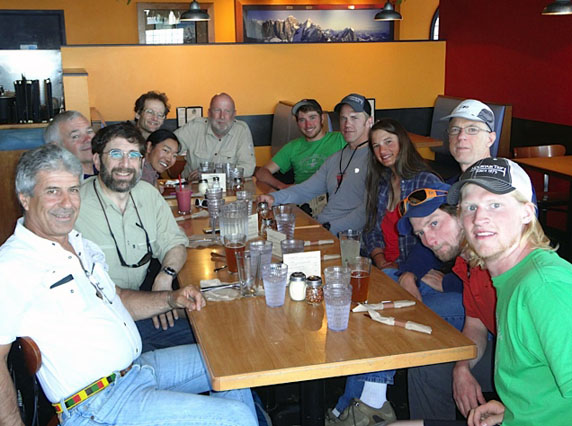 Yesterday, the team loaded up in our van and drove about two hours north to the small, end of the road town of Talkeetna, site of Denali National Park and Preserve’s South District Ranger Office and the airstrip from where air taxis launch for the Alaska Range.  They were provided an additional expedition orientation by NPS Rangers and then headed over to the air strip, where they finished weighing their bags for the short flight into the Range.

Loading up into ski-equipped airplanes is always exciting, and as they propellers begin to turn, the level of excitement seems to increase commensurate with the RPMs of the plane!  They rolled down the tarmac and rose steadily over the lush green of the Matanuska-Susitna Valley and made their way into the white, back and gray landscape of the Alaska Range.  The flight takes about 35-45 minutes before they descend into the relatively narrow Southeast Fork of the Kahiltna Glacier.  Skis down, the planes bump and glide to a stop in one of the most remarkable places on the planet.