This morning another team of climbers from around the world met a team of Mountain Trip guides at the Millennium Alaska Hotel in Anchorage to finish their preparations for an attempt on the classic West Buttress route of Denali.  The West Buttress is an iconic route that climbs over 13,000′ from the southeast Fork of the Kahiltna Glacier to the summit of the highest peak in North America.

The team will move up utilizing a series of camps, each one approximately 3,000′ higher than the previous one.  They will pace their ascent in a fashion that will promote their bodies’ ability to adapt to each successive new altitude, a process known as acclimatization.  The plan for climbing the mountain also involves making two trips between some camps, which achieves two purposes, it enables the team to carry their veritable mountain of food, fuel and supplies up the mountain more easily, and it also allows them to follow the climbing axiom of “climb high and sleep low,” which also helps aid their acclimatization.

An ascent of the West Buttress can take up to three weeks, and requires approximately 125 pounds of food, fuel and equipment per climber.  It is a challenging and demanding undertaking on one of the world’s most challenging mountains.  Situated a mere 3 degrees of latitude south of the Arctic Circle, it is renowned for it’s extreme weather and potential for cold temperatures.  The mountain rises some 18,000′ above it’s surrounding landscape, giving it the highest vertical rise of any mountain on the planet.

Denali is a beacon for climbers, who train for months and years to prepare for the challenge.  The team assembling in Anchorage today is a diverse group from three continents, all brought together by a love of wild places and a desire to stand on top of North America.  Let’s meet them!

Sebastian Merriman from the UK

Laura Duncan from Colorado – our intrepid Office Manager is assisting on this trip in an apprentice position! 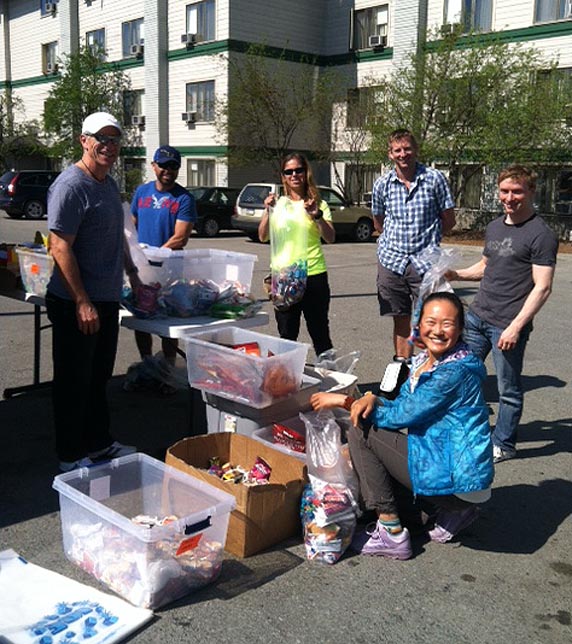 After their team meeting, the crew spent some time selecting their lunch snack food for the expedition, under the guidance of the guide team.