May 3 Denali Expedition — Meet the Team!

Welcome to Alaska, May 3 Denali Expedition! 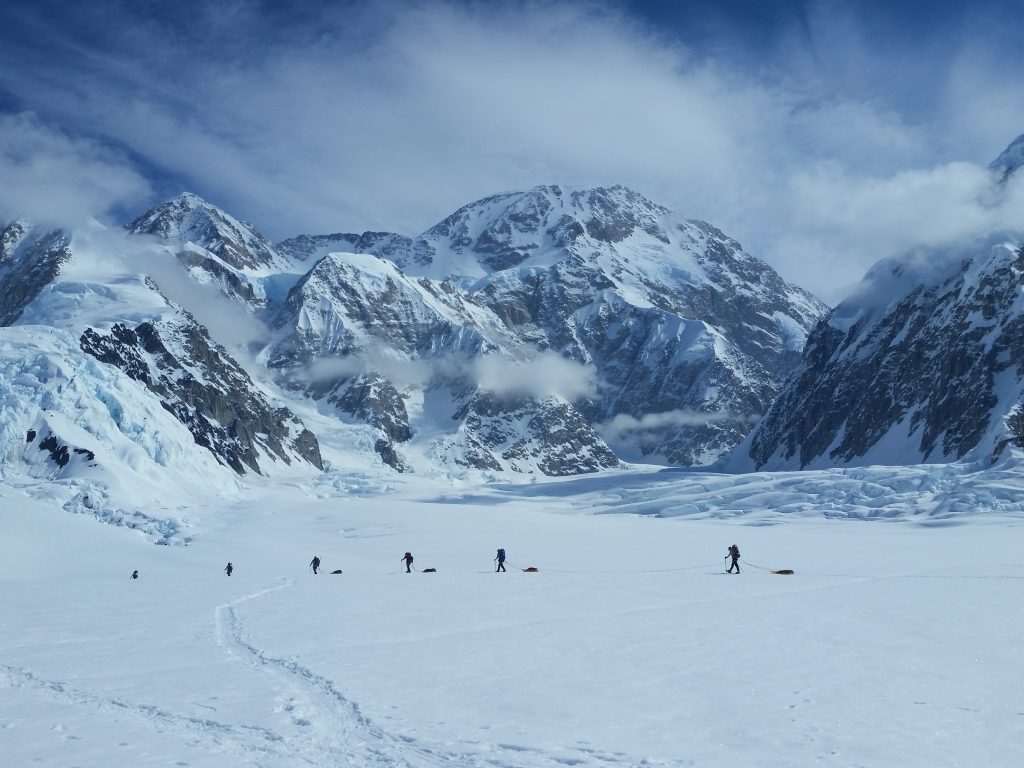 It’s that time of year again and we can’t help but get excited. In late April and early May, climbers begin to arrive from all around the world to attempt various routes and classic climbs on the notorious, aesthetic peaks of the Alaska Range. This will be our 46th consecutive season guiding on Denali, and we’re honored to welcome the May 3rd team–our first West Buttress team of the season–and all of the other climbers that have trusted us to help them test their fortitude on the highest mountain in North America.

At 20,310 feet (6190 m), Denali rises a full 18,000 feet 5486 m) above its surrounding landscape.  It has the highest vertical rise of any mountain on earth, and due to its location so close to the Arctic Circle, conditions can often be very winter-like well into the summer months. Around the solstice, the Alaska Range experiences over 20 hours of daylight, and even in the depths of night the sun never truly sets. The West Buttress, the route the team will be taking, will lead them through heavily glaciated terrain from base camp on the Kahiltna Glacier at 7,200′, to Camp One at 7,800′, Camp Three at 11,200′, Camp Four at 14,200′, High Camp at 17,200′, to the 20,310′ summit.

Our first Denali team of the season will be gathering today in Anchorage, Alaska to sort out the last-minute details before heading north to being their 22-day expedition to the highest point in North America. Afterwards they will head north to the small mountain hamlet of Talkeetna, on the edge of the vast and beautiful Denali National Park. Weather permitting, they will load up over three week’s worth of supplies onto a Talkeetna Air Taxi plane and then fly into base camp.

Let’s meet the team, all joining us from The Netherlands!

The trip will be led by veteran guide Mountain Trip guide Jacob Schmitz, who has been leading expeditions around the world for the past two decades, including Mount Everest; he also calls Amsterdam home for the majority of the year when he isn’t traveling to guide. Jacob will be assisted by guide Mason Stansfield, who has done several trips in the Alaska Range and on Denali, and spends the rest of his year guiding in southwest Colorado.

Please keep in mind the adage of “no news is good news” in terms of the updates from the team in the field. There are some days when circumstances, like poor satellite phone reception (this happens frequently at Camp 2 at 11,200′, as it is situated in a high-alpine basin with massive peaks on all sides), fatigue from a particularly long day, no change in their situation due to weather, etc., will prevent teams from calling in an update. Friends and family are encouraged to leave comments for their loved ones on this expedition, but keep in mind that they will not be able to see posts or comments until they return to Talkeetna after the end of their expedition, once they leave the glacier. You can also follow along with the team’s progress up the mountain via their inReach, which we will provide a link to in the next trip report that we post for the team once they have arrived on the glacier.

Best of luck to the climbers! 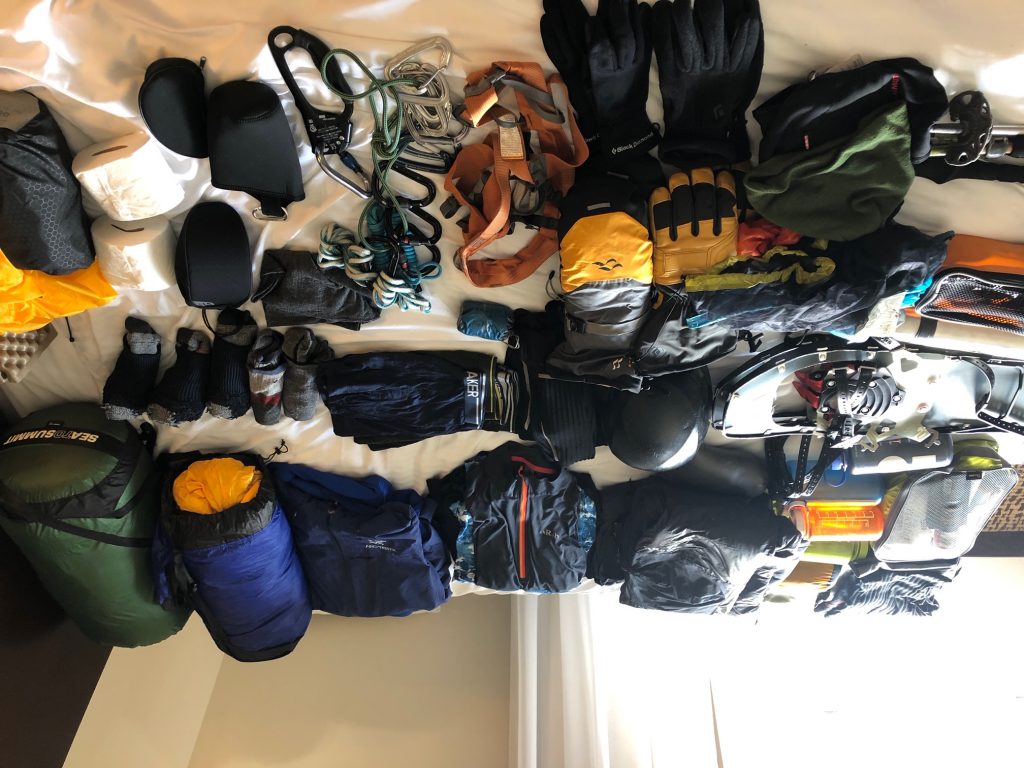 Checking out everyone’s gear to make any last minute adjustments before heading up north to Talkeetna. 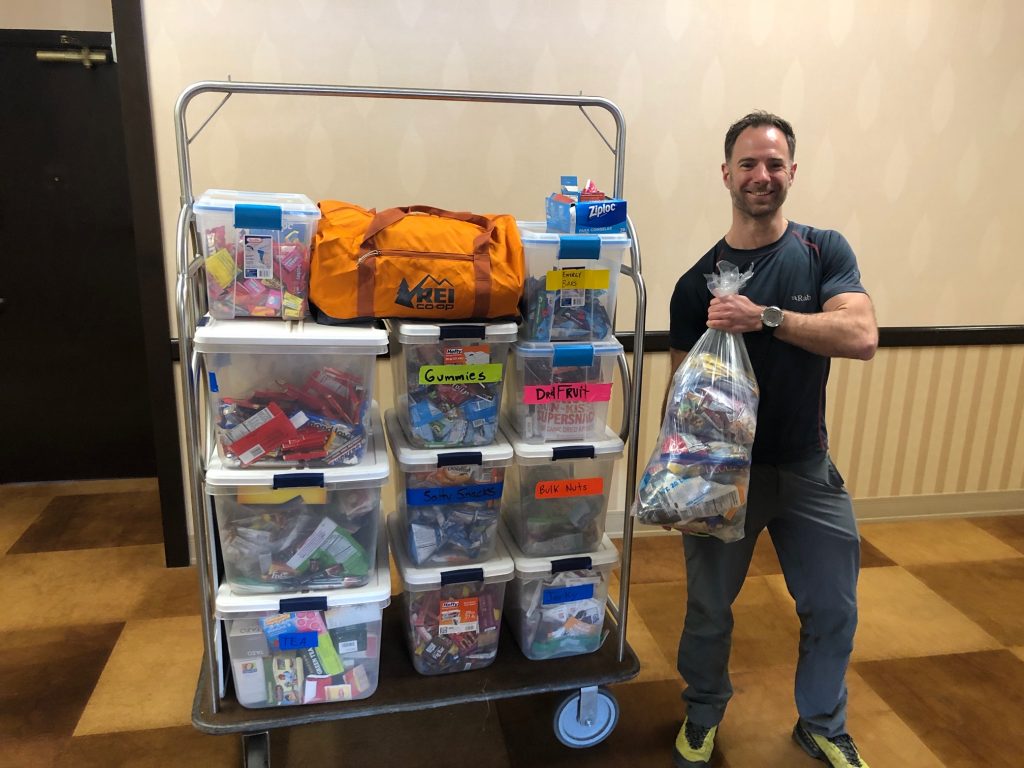 Packing snacks for lunches on the go for the expedition! The crew will burn a lot of calories carrying heavy loads, so lots of snacks are necessary. 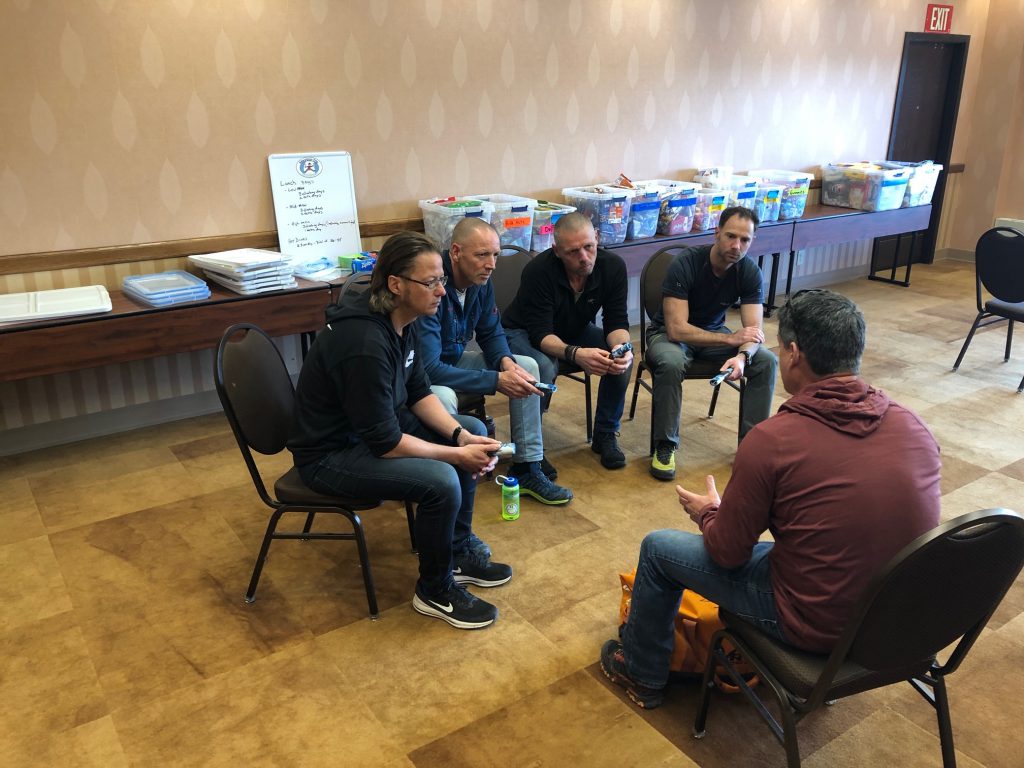 The team listens in on their expedition briefing from lead guide Jacob Schmitz.