Denali, often called “The Great One,” or “The Roof of North America”, is often touted as the hardest of the Seven Summits, or highest peaks on each continent. Denali rises in stark contrast above the surrounding tundra, standing like an icy sentinel over south central Alaska, visible from over 100 miles away. The climbers of the June 19 team, who have gathered in Alaska from around the world, will be taking the classic West Buttress Route to the summit. The West Buttress is the most commonly used route by mountaineers to reach the 20,310′ summit which gains over 13,000 vertical feet from Base Camp.  The team will spend a maximum of 21 days on the route, three weeks endeavoring towards the highest point in North America.

We welcome another group of climbers who have chosen to place their trust in Mountain Trip. This year marks our 43rd year of guiding on Denali. 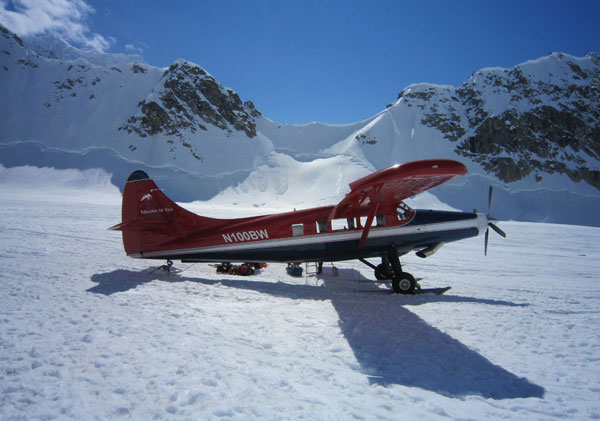 A Talkeetna Air Taxi ski plane landing near Denali Base Camp at 7,200′.

Michael Fahrenkamp, who has traveled from Germany.

Wui Kin Chin, who joins us from Singapore.

Jan Wienands and Ursula Teichmann both from Cologne, Germany

They will be accompanied by Mountain Trip guides Brian Muller (lead), Taylor Pyle and Nick Nason. Climbers and guides met for the first time in Anchorage, Alaska a few days ago, where they went through a briefing on the mountain and the expedition, followed by an intensive gear check to insure that everyone’s gear is appropriate and sufficient for the extreme elements of the Alaska Range.

Today, the team will load up a Mountain Trip with all of their gear and made the beautiful drive north through several mountain ranges to the quaint, end-of-the-road town of Talkeetna, AK, the jumping off point for most expeditions into the Alaska Range. From Talkeetna, the guides and climbers will take a ski plane piloted by our friends at Talkeetna Air Taxi, and enjoy an absurdly scenic flight through the outskirts of the range, over flowing glaciers, braided rivers and jagged peaks, to reach Denali Base Camp at 7,200′ on the Kahiltna Glacier.

We would like to remind those at home that while we will do the best we can to post updates on the team every day, there might be a few lapses in communication. Please keep in mind the old adage “no news is good news,” and don’t be too alarmed if one, two or even three or four days pass without an audio update from the team. Although satellite phones are often great forms of communication, they sometimes experience difficulties above 14,000′ deep in the rugged Alaska Range, especially during storms.

For family members and friends at home who are following along at home, you are welcome and encouraged to post comments to your loved ones on the team, just know that they have no way of reading them until after they return to the non-glaciated world and relative civilization of Talkeetna, Alaska.

We wish the best of luck and success to the June 19 Team! The next update we post for them will come in audio form, likely from Denali Base Camp at 7,200′ on the Kahiltna Glacier.