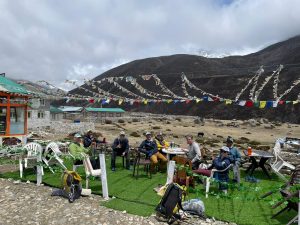 The team is down in Dingboche tonight resting at the relatively low altitude of only about 14,500 ft.  It’s a pretty nice break for the body to get down to these altitudes and climbers generally sleep, eat, and recover really well after being up high.  Our team is once again staying at the Snow Lion Lodge and we’ve booked out the entire place to avoid any additional Covid exposure concerns.  The Snow Lion is one of our favorite spots in the Khumbu and Mingma always takes great care of our team. They’ll spend the next few days relaxing and recovering at the Snow Lion before heading back to basecamp and preparing for the summit push!

It’s been a strange year with lots of rumors and folks posting “click bait” articles and blog posts about doom and gloom on Everest.  As always, the truth is usually somewhere between the rosy denial of any COVID-19 and the sensationalist rumors designed to capture headlines.  All we can say is what our experience has been on Everest this season.  We haven’t had any confirmed COVID-19, but have had a couple of our Sherpa team evacuated due to concerns about Covid symptoms. Our entire team has been very careful to stay in our “pod” and we’ve basically had closed camps including being very careful with any food deliveries, etc. The general consensus is that the only likely exposure points for our climbers, including our staff, is in the Khumbu Icefall where often climbers are close together on the route for short periods of time. It’s not a high likelihood situation, being outside, wearing a buff, and for short periods of time, but it is certainly a time where there is mixing between teams.

On our 2nd rotation, we had one Sherpa climber who wasn’t feeling well at Camp 2.  This isn’t uncommon and many of the symptoms of Acute Mountain Sickness(AMS) are the similar to Covid symptoms.  He came down to base camp where was quarantined, and eventually flew out to Kathmandu where he received the “gold standard” PCR Test, which came back negative. By the time he was in Kathmandu, only a day after his first potential symptoms, he felt fine and tested negative for Covid.  In the meantime, the rest of our team had to decide what to do assuming he was going to test positive and most of our Sherpa team would be considered close contacts.  The safest option seemed to be to have everyone come down to base camp, not carry any more loads up high, and test the entire team with rapid tests. None of our climbers had any symptoms, and everyone tested negative with our rapid tests, except one member of our Sherpa climbing team.  Once again, our whole team was in quarantine, and the Sherpa climber with the positive rapid test was evacuated, against his wishes, to Kathmandu.  Upon arrival in Kathmandu, he was once again given the PCR Test and it came back negative for COVID and he doesn’t have any symptoms. These are the continuing challenges of operating in this new world of COVID and we’re doing our best to operate responsibly, as we promised our climbers and staff we would.

We’ve got to play a bit of catch up to get our tents and oxygen in place up at Camp 3 and the South Col now, but we’re still on track for a summit attempt later in the season as planned.

Ultimately, we still haven’t had a confirmed case of COVID in our team (including staff), but it has definitely affected our team in many ways. We’re grateful to have the opportunity to be over there and will continue to do our best to operate in a way that manages all of the risks involved in climbing Mount Everest in the most responsible way.