Todd Talks! With Laura Duncan about her climb of Aconcagua

Last December, our Office Manager, Laura Duncan, joined a Mountain Trip team on an Aconcagua climb, her first venture into the big mountains.  Laura had worked with us since April 2010, and is definitely an “outdoor” person, but her Aconcagua climb was a big step.  I sat down with her and tried to get her perspective on the expedition, in the hopes that some of the lessons she learned might help prospective climbers. 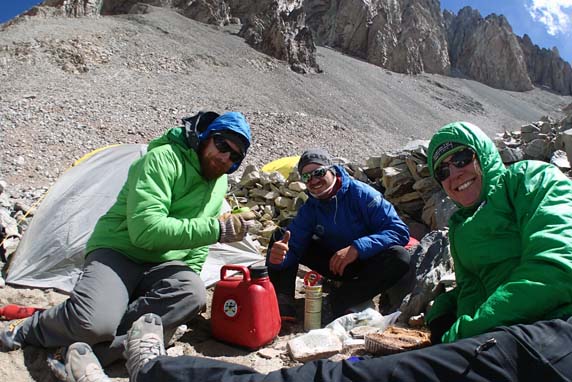 Laura, with guides Joe Butler and Agustin Karriere at 16,400′ on Aconcagua

T:  What was your first concert (to borrow a question from our friend Lucky Lindy)?

L:  I thought we were going to talk about Aconcagua!  The Boss, “Born in the USA” tour – am I dating myself?

T:  Why on earth did you want to climb Aconcagua?  As a mother of two, with a full-time job, why would you want to be away for a month?

L:  I have spent a lot of time in wild places over the years but I’d never been higher than the 14’000′ peaks we have in Colorado.  I kept hearing you and Bill talk about high altitude and I wanted to find out how I would fare up high.  The climb was an opportunity to challenge myself in a wild place, and fortunately, my family was very supportive, my boss gave me the time off ;-), so I went for it!

T:  What prior experience in the mountains had you had before Aconcagua?

L:  Most of my outdoor experience was on backpacking trips, fly fishing trips, and on 14’ers.  I’d used crampons and an ice axe a little bit, but had not had formal training until just before my Aconcagua climb.  If I were to self-identify, I’d say that I was a hiker and a backpacker. 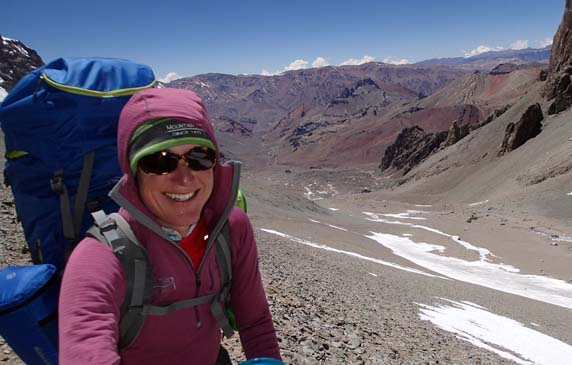 T:  How did you train for the trip?

L:  I like to hike, and I try to get out at least 3 times a week on  hikes that average about 3-4 miles, with about 12-1400 feet of elevation gain.  In preparation for Aconcagua, I added running to my regimen, and just continued to go outside, sneaking in longer hiking and backpacking trips.  All in all, I didn’t really change my routine all that much, I just added a little more time to each activity…

T:  How did your training prepare you for the climb?

L:  I felt great about how I had trained for Aconcagua.  I had one rough day on the approach, which was a bit disconcerting, as it wasn’t really a “hard day,”  we hiked with light packs and only gained a bit over 1,000′ over the course of 8 miles.  The following day I felt great, so I’m not sure why I wasn’t feeling strong on that particular day.  Above Base Camp, I felt great each day, and stronger, and I felt that I had some reserves after each day.  Summit day was physically challenging, but honestly, it felt a bit easier than I had anticipated. I was pleased with my body’s ability to perform at altitude.

When I climbed Denali six months later, I wished I had been stronger, as that was a physically more difficult climb for me. 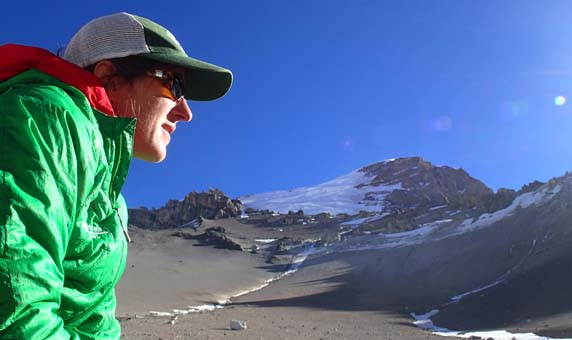 T:  What was a highlight or a low point of the trip?

L:  Well, our team got hammered by a serious wind event that destroyed some of our tents, which led several team members to decide to leave the trip and return to Mendoza.  A definite low point was when we made the decision that some of the team would descend after the storm.  I had really enjoyed the team-building aspect of the expedition and it hurt to say “adios” to some of my new friends.

I guess high points would include that team aspect of the expedition.  I have made life-long friends and have visited some of my team mates in recent months.  Also, it felt great to finally descend down the west side of the mountain and arrive at Plaza de Mulas.  I felt a real sense of relief following our arrival at that crazy camp that made me realize that I had unknowingly been living with some degree of stress while on the upper mountain. Oh yeah!  Another highlight was calling my daughter’s class from the mountain and filling the group of First Graders in on my adventure!! 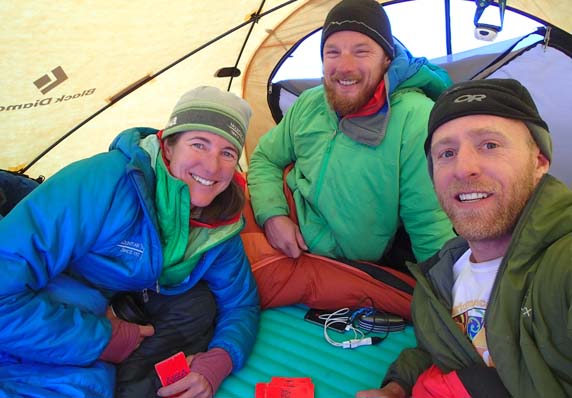 Laura, Joe and Rich C, enjoying some relaxation before their summit push.

L:  I had a great time!! I felt that the whole experience was in line with my expectations.  The lack of snow on the mountain was a bit surprising, even though I had been told that we might not encounter any.  Mendoza was wonderful and a great place to begin and end the trip.  I know that I had almost daily access to picking your brain, but I felt that I had a pretty realistic expectation of what the climb would be like. 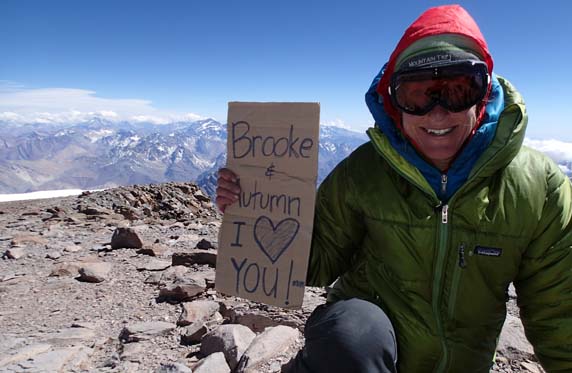 Sharing the summit of South America with thoughts of her daughters!

T:  How did the experience prepare you for your Denali climb 6 months later?

L:  Denali was harder, for sure.  It was a bit easier to train for Aconcagua because I had all summer and autumn to get out for hikes.  In training for Denali, I  skate skiied a ton and I felt that I was more fit than I had been immediately before Aconcagua.  I spent time refining my crampon and ice axe skills before Denali, and was glad that I had, because you spend a lot of time using those tools up in Alaska.

I think that my personal kit was in good order when I climbed Denali, and my experience on Aconcagua helped me do a better job of looking after myself in a sometimes hostile environment.  Also, I suppose that I had some degree of fear or perhaps just uncertainty about how I would feel at altitude.  My experience on Aconcagua definitely eased that concern, and I felt more relaxed on Denali.  Summit day on Denali was scarier for me than any day on Aconcagua because of the terrain we would climb through, but at least I wasn’t stressing about how I would feel and perform at altitude.

Laura is in the office most days and is happy to help share her experience with anyone interested in venturing forth onto a big, cold mountain.  Give her a ring!