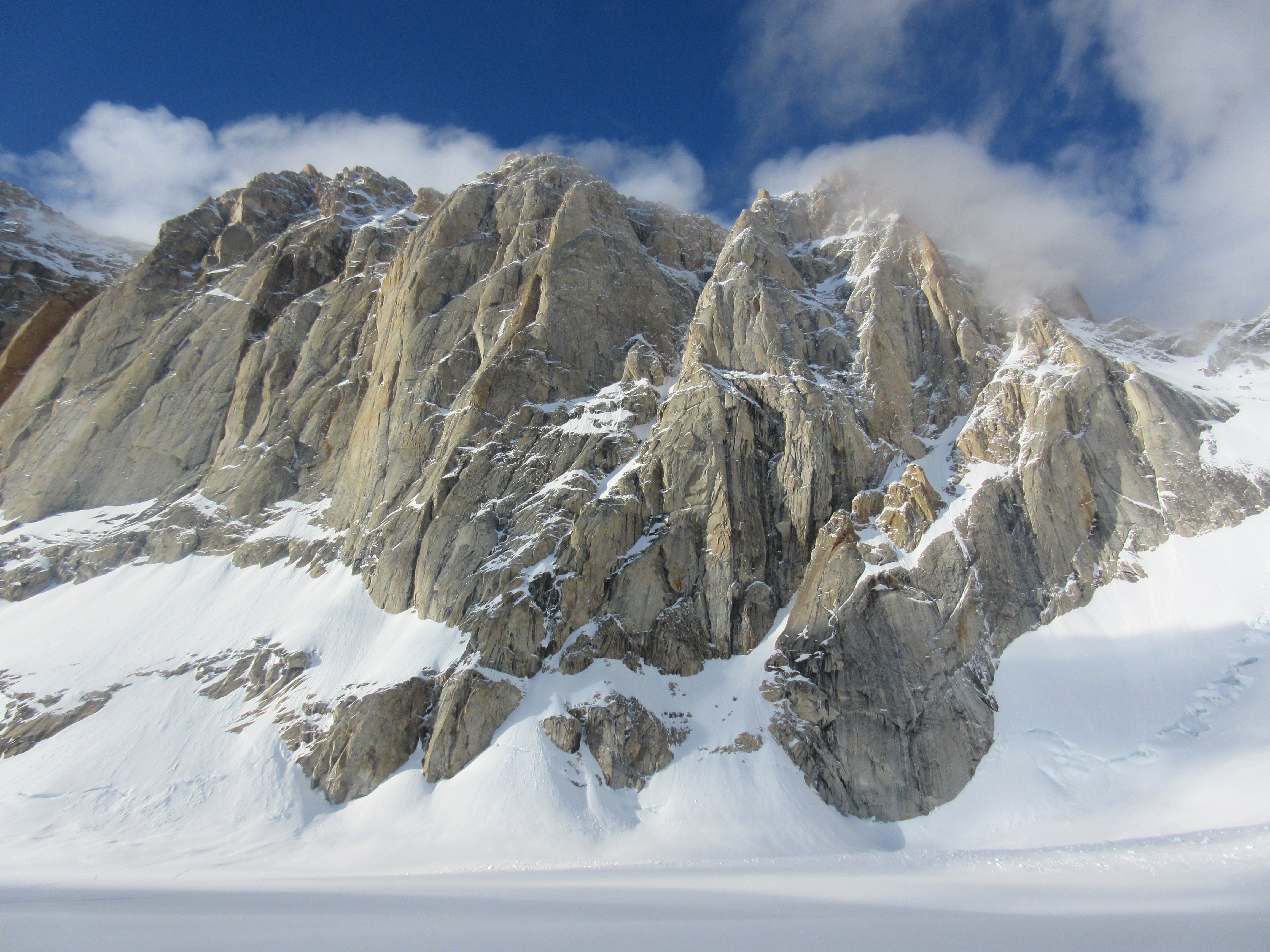 While most visitors to the Central Alaska Range toil under heavy loads on Denali’s West Buttress, some of us prefer the relatively-smaller surrounding peaks, with their steeper faces and lighter backpacks. It was during my first trip up Denali in 2010, while flipping through a well-worn guidebook in my icy tent, that I decided to explore the technical ascents offered on the many mountains which flank The High One. 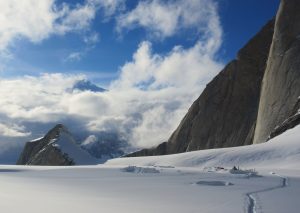 Camp below the route.

Fast forward seven years, and I had the very good fortune of guiding two climbers on my favorite technical Alaskan objective: a route on the 10,300’ Moose’s Tooth named “Ham and Eggs.” Ham and Eggs has a long and colorful history dating to its first ascent by the eminent Jonathan Krakauer, along with Thomas Davies and Nate Zinsser, in 1975. For forty years, this sinuous 3,000-foot ice climb has remained an alluring “tick” for every serious North American alpinist.

This past April, guests Alex and Justin, along with myself, arrived in fine style beneath the Mooses Tooth via a bush plane on skis. As the aircraft slid to a stop on a pocket glacier above the astonishing Ruth Gorge, we peered through the foggy windows to catch a glimpse of our route, towering overhead in the clouds. One of my favorite things about this expedition is the simple logistics of approaching our base camp: kick your bags out the door of the airplane, haul them a few minutes up the hill, and then lay back and admire your surroundings. Similarly, the luxurious amenity of the bush plane in the hands of the country’s finest pilots means that the approach to the technical climbing is mere minutes, not days. 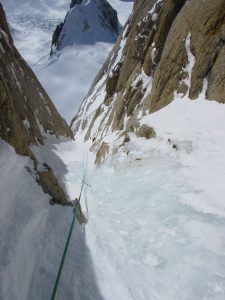 The crux of the route.

On this expedition, we warmed up with some day hikes around the Root Canal glacier, including a fun, scrabbly ascent of a peak called the Incisor, which is a pointy crows’ nest with vertiginous views of the Ruth Glacier. Next, we previewed the first few pitches of Ham and Eggs. And then, it began to snow.

As other groups used breaks in the light snowfall to hitch a flight back to civilization, the three of us settled into a comfortable cook tent with hot meals, great conversation, and lots of coffee. Justin and Alex are both skilled ice climbers, having honed their technique in the cold winter environment of New Hampshire. And they also knew that to make any light-and-fast ascent, the savvy alpinist must wait for just the right conditions. After a few days of patience, we got what we had been waiting for: several successive days of sunshine. Better yet, almost every other suitor of the route had departed, leaving the mountain to us alone.

Ham and Eggs is an incredibly enjoyable and classic alpine line. It combines steep, challenging pitches of ice- and mixed climbing with stretches of moderate, steep snow. Including the initial approach slopes, we would climb 19 pitches to the col at the top of the ice couloir.

We departed in the chilly darkness at 4AM, intent on getting as much sunshine as possible once finished with the approach. Memorable sections of the route included an airy traverse on the second pitch, with the void below tickling at your heels. Higher, several steep ice pitches required the leader to do extensive removal of the gravity-defying “snow mushrooms” that festooned the route after stormy weather. Often, clearing the snow away from the underlying ice and rock was more laborious than the climbing itself.

The crux of the route is widely considered to be the 7th pitch, in which a hundred-foot sheet of vertical ice blocks your path. On this ascent, the ice was so friable that it proved to be totally unclimbable. Thankfully, this pitch offers an alternative route for the level-headed mixed climber, and we managed to scrape up the icy cracks of a rock wall on the right. Some exciting moments ensued as I groveled over the top of the rock barrier and into the steep, sugary snow for which the Alaska Range is famous.

Having surmounted the route’s crux, we still had nearly a dozen pitches of steep climbing to go. After a hydration break, we focused on climbing efficiency while we racked up the vertical mileage. Each team member fell into their role of leading, following, belaying, and organizing ropes. Only when you paused to catch your breath would the great height to which we had climbed be noticed. As the couloir fell away below us, and our tents appeared like specks of pepper on the white tablecloth of glacier. 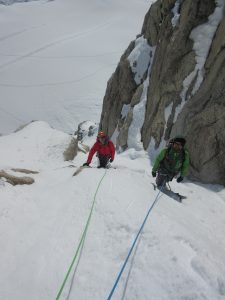 Climbers Alex and Justin on the long descent after a successful summit.

Suddenly, there was nowhere left to climb. Our paradigm canted ninety degrees from the vertical world back to the flat as we arrived at the ridge atop the couloir. Smiling into the breeze, we took in the jaw-dropping views of Denali, Mt. Huntington, and the Ruth Gorge with barely a cloud in the sky. But soon enough, our break was over. It was time to ease back over the edge and descend via the way we came up. The Mooses Tooth is like a shark’s fin of granite — there is no easy way back down from the top.

With great focus, we completed rappel after rappel. Thread the ropes, load the rappel devices, lower yourself 200 feet, pull the ropes… Finally, after 18 raps, we were released from the grip of the mountain and deposited onto the flat glacier. As we coiled our ropes and trudged back to camp, the enormity of our ascent was slow to sink in. After seventeen hours of mental and physical exertion, we collapsed into the cook tent, and soon to our sleeping bags.

The next day, we dragged our duffels and backpacks the two-hundred meters back to where the airplane had first deposited us, eight days prior. As we loaded the plane to go back to Talkeetna, we couldn’t help but pause and glance up into the mist that had again enveloped Ham and Eggs. Though our expedition was relatively short when compared with a Denali ascent, our experience was as intense and rewarding as I could have imagined. And while I thoroughly enjoy the ultimate endurance exam provided by Denali, I will always have a special passion for moving quickly as a small team on Alaska’s technical objectives.