Did the Hillary Step on Everest Change?

The Hillary step, named for Sir Edmund, is the last steep step before reaching the summit of Mount Everest from the Southeast Ridge and most years it can be a pretty tricky spot to climb and a real bottleneck for climbers who are almost at the summit.  In 1953 this 12 meter high rock step was a major obstacle for the first ascencionists, Tenzing Norgay and Edmund Hillary, nearly thwarting their summit attempt.   In recent years, there has been rope fixed through that section allowing climbers to use an ascender to assist with climbing through that last, steep rocky challenge.  Fixed rope helps a lot, but it is still a difficult part of the route, especially given it’s extreme altitude. 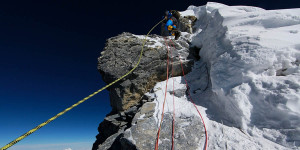 During the 2014 and 2015 climbing seasons, no climbers reached the Hillary Step on Everest due to the tragic avalanche that swept the Khumbu Icefall in 2014 and then the massive earthquake that devastated much of Nepal in 2015. This past season we were actually able to climb around the Step via a relatively easy snow slope, which begged the question, “Did the earthquake or erosion cause rock to fall from the mountain, forever altering this iconic feature or was just a lot of snow up high this past season?”

I recently tried to flush out an answer, based on photos I’d taken in the vicinity on my three trips up the mountain (2010, 2011 and 2016).  There was definitely some significant snowfall up high on Everest during the 2016 spring climbing season, but could it have been so significant that it provided a snow-covered “sneak around” that had not been previously documented?

It’s hard to imagine, but that is certainly a possibility.  Looking over the photos below, I think it’s more likely that there was some relatively significant rockfall away from the area that left the underlying profile of rock at the Hillary Step changed.  Such rockfall could be a result of the 2015 earthquake, or perhaps it was just from natural erosion processes.  Mountains are always changing, and steep sections of rock are prone to crumble over time as we’ve seen on many other mountains.

Last year the Hilllary Step was snow covered and wasn’t difficult at all.  We climbed up it quickly and easily on our crampons, a real treat, considering the 8790 meter elevation!  Comparing the two photos below, the first from 2016 and second from 2010, it is hard to make a conclusive determination, but it is also hard to recognize the rocks that were the obvious obstacles in the 2010 photo below or in the 2011 photo above. 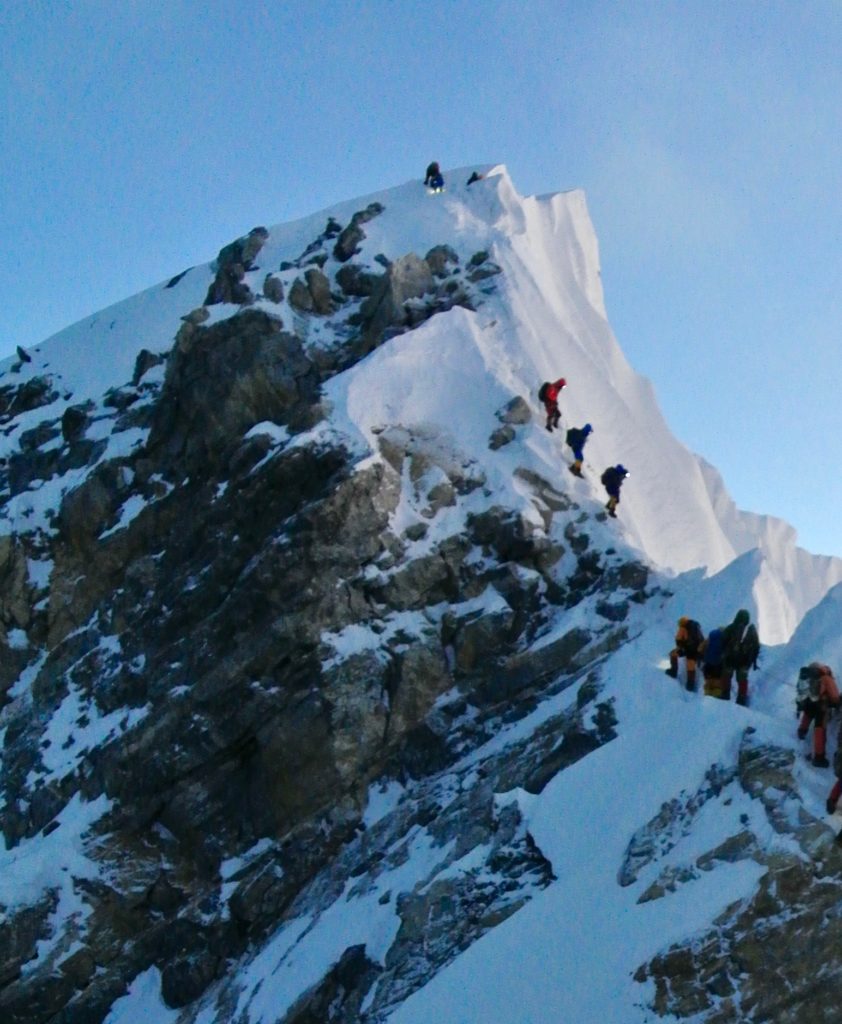 Climbers on the Hillary Step in 2016.  Note that, while still somewhat steep – you could climb on snow the entire way up and down the Step. 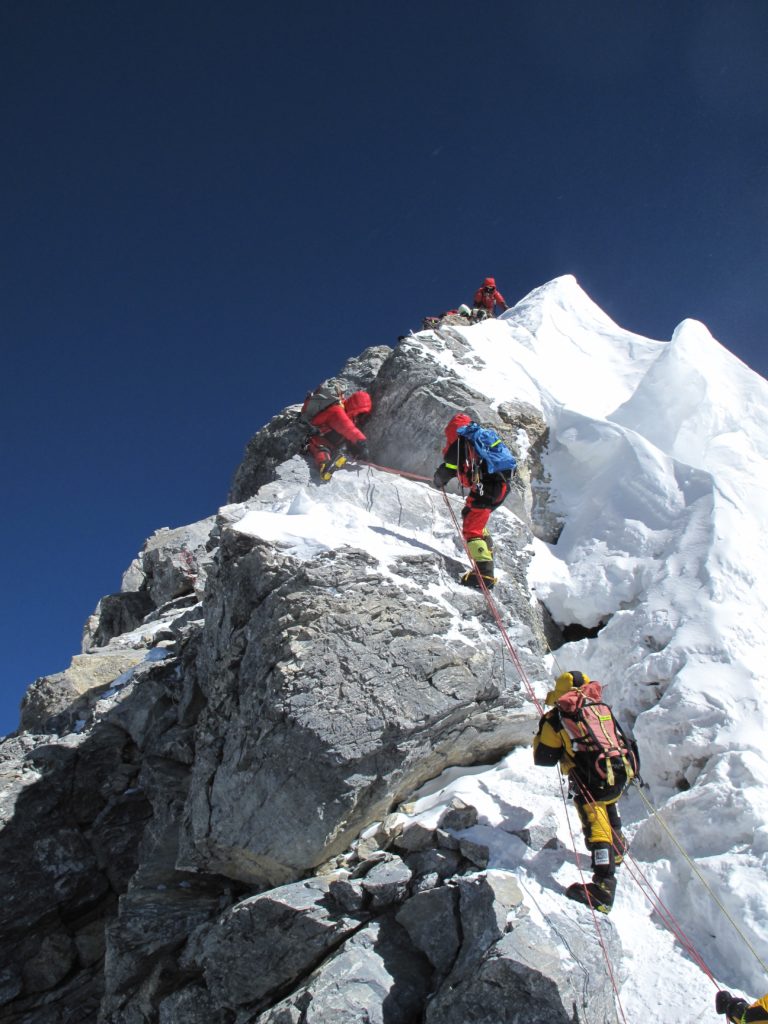 The Hillary Step during the 2010 Mountain Trip expedition.  We needed the fixed rope to climb through the rocks. 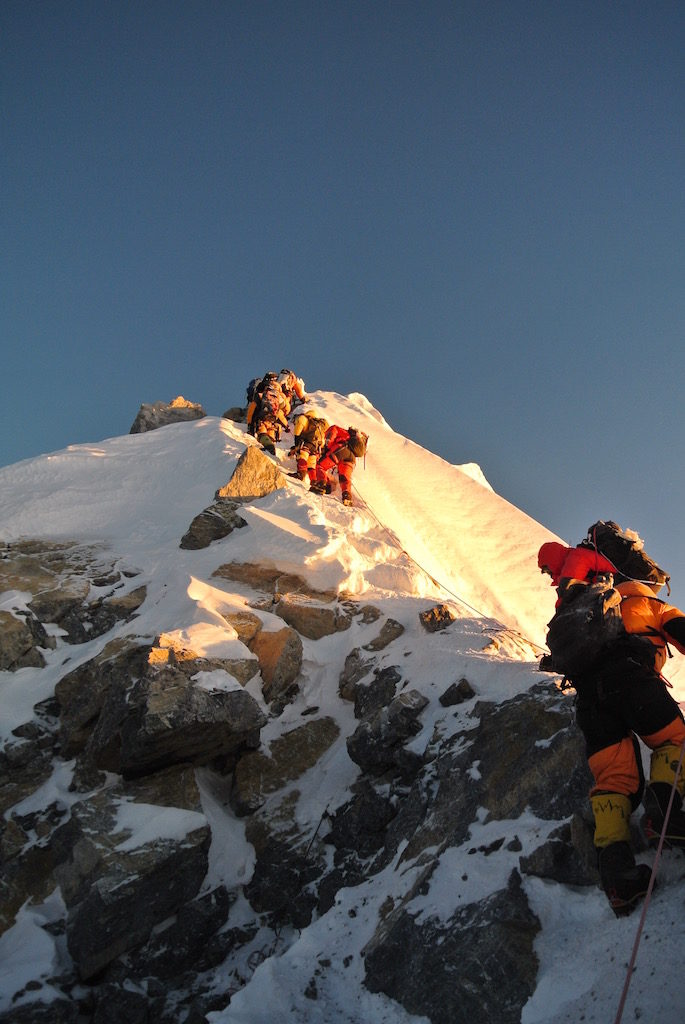 Another look at the Hillary Step in 2016.  This is shot from higher up on the route than the above image, but it still shows quite a difference.

And finally, I thought you might enjoy this video of the Mountain Trip team on the Hillary Step at sunrise on May 21, 2016.

I’m not a geologist and I certainly don’t think there is truly conclusive evidence in these pictures, but after seeing it in 2016, it was pretty much unrecognizable in comparison to previous years.  Our Sherpa guides were pretty convinced that something up there had changed as well.   I guess we’ll just need to go back to inspect further in 2017!

We’d love to have more eyes join us as we take another look en route to the top of the world or come along on our Everest Base Camp trek!