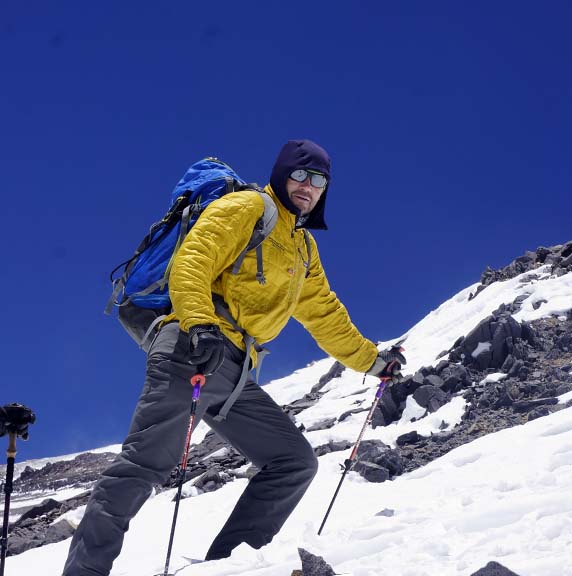 Part of our job as mountain guides is to keep abreast of the latest and greatest gear that is available.  Sometimes the latest isn’t so great.  Sometimes we love it, but it doesn’t immediately fit into our vision of how it should work together with our clothing system.  The Nano jackets from Patagonia fall into this latter category and we have evolved how we use them to incorporate them into our layering systems.

A few years back, Patagonia introduced a light weight synthetic filled line of jackets, called the Nano.  Filled with Primaloft One insulation, the jackets are available in a pullover, a full zipped version, a zipped hoody and a vest.  We immediately fell in love with the pieces, as they are significantly warmer than a similar weight fleece, and offer protection from the wind.  They pack small, work well when wet and didn’t look too “techy” when wearing them out and about in town.

As with any new piece of kit in our mountain arsenal, we had to ask ourselves, “What will the Nano replace in our current layering system?”  Therein, lies the rub, as they say… My standard torso layers for a big cold mountain like Denali or Aconcagua consist of:

I couldn’t wrap my head around replacing my light fleece hoody with a Nano, as it seemed too warm, and I couldn’t justify carrying it as a stand alone piece of clothing, no matter how much I loved it.  As I began packing for my recent Aconcagua trip, Bill Allen suggested I try a system he had used on Denali last spring.  Rather than taking a light fleece and a thick puffy jacket, he took two Nano layers.  Bill felt that this system gave him plenty of warmth and also lightened his overall weight.

After more than a bit of mental wrestling about straying from my tried and true system, I decided to give it a go.  As Aconcagua can have some really hot days on the mid to even upper mountain, and in light of having the warmer Nano layer, I changed up my traditional lighter (base) layers.  For my trip, I packed the following:

I was psyched!  I felt that I had a very versatile system that never left me feeling too hot or too cold.  The combination of the two Nano layers provided me warmth that seemed equal to my R1 Hoody and my thick, Micro Puff Hoody, and it saved me a half a pound.  My concerns about not having a thick, warm layer to pull on at rest breaks was unfounded, and I was really pleased with the combination.

I would absolutely consider this combination for a Denali or even a Mount Vinson climb.  For Vinson, I would probably use my R1 Hoody instead of the Capilene 4 Hoody, as it can get darn cold down in Antarctica.  I was asked if I had “up sized” either of my two Nanos, and I did not.  I used my pullover under the hoody, but Bill told me that he wore his combination in the reverse order.  If this sort of system sounds appealing, play around with it and see what you prefer!

To check out the line of Nano jackets, please click HERE.