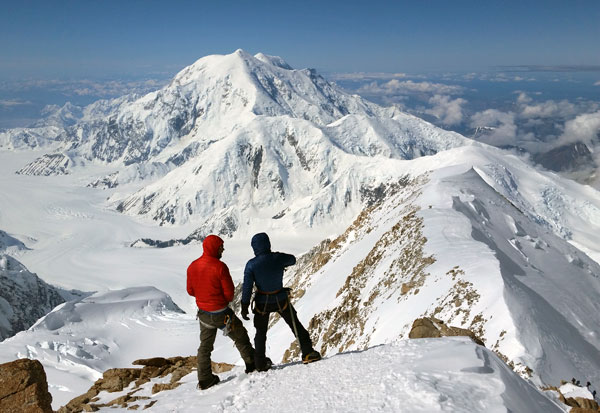 Sometime in the late-90’s I was approaching a grade-6 Canadian ice climb, Virtual Reality, with my climbing partner Joe Josephson. As we walked and talked, the subject of Nanga Parbat’s Rupal Face, came up. I was the only one of us who had been to the Himalaya and I had seen the mythical “biggest-wall-in-the-world”. At the time the king line, the central pillar, was unclimbed and the famed 1970 route established by Reinhold and Gunther Messner and the Karl Herligkoffer-led expedition had not been repeated. Joe and I laughed about how awesome, and yet, how improbable it would be to someday climb that wall. Yet that conversation sparked the inkling of an idea that maybe, if I worked and trained intelligently and diligently enough, I might actually be able to climb the Rupal Face. In 2005, Vince Anderson and I would climb that wall, and paint our masterpiece. As Reinhold Messner told me in December 2016, a few weeks ago, ours is a climb that, in his mind, has not been surpassed or bettered.

Five years later, I lay in a crumpled heap half way up the North Face of Mt. Temple broken, dying, and awaiting a risky and dubious helicopter rescue. I had a few hours on that frozen, icy ledge to reflect on the things I hadn’t done. I’d not spent enough time with my sister and parents, work I had never started. But the thing I regretted most was that I’d never started a family.

Eleven months later I met Eva, and fell in love. We were married the next year, and, in 2016, we welcomed our son, Franz, into the world. Today, as a husband and father, and a man who has had his fair share of adventures and close calls in the mountains, I couldn’t be happier.

There is a reason I still remember that day with Joe, daydreaming about the Rupal Face, even though I climbed it over a decade ago with another partner. There is also a reason why I remember that fateful day on Mt. Temple, resolving that – if I survived – I would make it a goal to one day start a family.

The reason is this: In both these stories, dreams were born. On both occasions, I set lofty goals that, although big, I thought I might achieve.

So in 2017, and beyond, Scott, myself, and all of us at Uphill Athlete want to encourage you to do something big. Many of you have come to us for help to achieve your biggest goals: from summiting Everest to reaching Everest basecamp, from the climbing the Eiger North Face to leading grade 4 ice. It doesn’t matter what the goal is, what matters is that you set you set goals in the first place. I repeat: Do. Something. Big.

At Uphill Athlete, we consider it an honor to help you achieve your goals. We’re here to help you train; to apply proven training knowledge to equip you physically and mentally to reach your mountain sport goals.

And can we help you?